As the title Ode to Manoj and Babli indicates, these are the victims of a recent "honour killing," a phenomenon that afflicts India and other parts of the world where arranged marriages are the rule and strictly, violently enforced. Manoj and Babli had fallen in love and wanted to marry, but their union was forbidden as they belonged to the same gotra, or clan. Although unrelated, because both had the same surname, the elders considered their union incestuous. Ode poignantly portrays the wedding celebration the couple never had, and exposes the tragic clash between tradition and modernity that their story encapsulates.

It is an Indian ceremony, as we can grasp from the garlands of orange plastic flowers around their necks and the red fabric roses applied on the intricately abstract background of stylized floral motifs that radiate from inside to out, mimicking the traditional henna patterns applied to the bride's skin. Those fabric roses evoke the ritual of throwing flowers at the couple, and the pattern in the background on which they flow resembles a wallpaper of traditional bridal henna design. This brutal collision of the traditional and modern worlds is found not only in small villages but also cities. 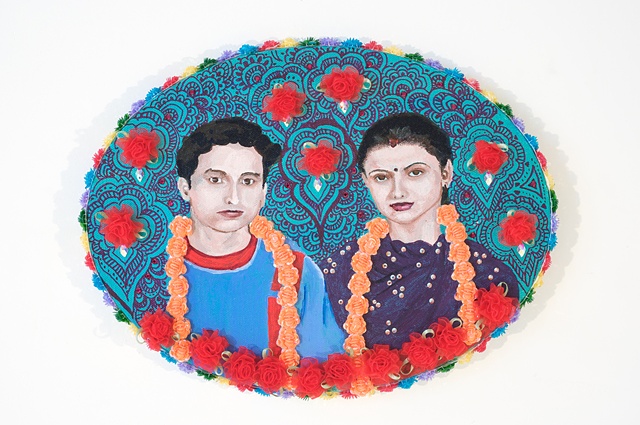 Ode to Manoj and Babli
< previous next >