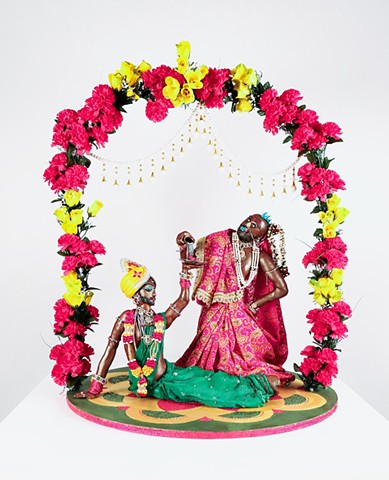 Two Boys in Saris
< previous next >

This sculpture is a portrait of two queer non binary South Asian Muslim performance artists/chefs in Australia. The postures of the figures are a nod to classic Bollywood cinema which informs the aesthetics of the subjects. The fabric and jewelry used to adorn the sculptures is traditionally used to adorn idols in Hindu temples. This sculpture subverts millennia old religious practices based on exclusion of individuals based on their gender, religion, caste and sexuality by inserting the queer Muslim bodies into traditionally Hindu imagery, complicated by the visual modernity of the figure sporting a blue Mohawk and blue lipstick.